The surgery on Thursday went well.  I spent another lovely night at Central Baptist Hospital.  Don't get me wrong: the people are really nice there, but I quickly grew weary of being woken up every three hours, sleeping with an oxygen mask on, and being fed orange Jello and beef broth.  I got to go home pretty early on Friday morning, and as if the whole ordeal hadn't been bizarre enough, leaving the hospital was even more bizarre.  The nurse refused to unhook me from the IV until I ate solid food, but she wouldn't give me any solid food.  She also insisted that I sleep in the oxygen mask even though my oxygen sats were fine.  After the shift change, I got a new nurse who was on duty when I was discharged.  She and the student nurse who was shadowing her unhooked me from everything, and then the nurse proceeded to tell me that when my ride arrived, I could go ahead and just leave.  All I had to do was wave to the nurses at the nurses' station and tell them I was leaving.  By myself.  On my own two legs.  Without a wheelchair.  I mean, I was perfectly capable of walking to the elevator and to the front door alone, but I found it odd that the nurse would let me go alone due to liability.  As I was walking down the hall to leave, a staff member stopped me and said, "What are you doing?  Does your nurse know you're walking down the hallway?"  When I told her that my nurse not only knew but TOLD me to do it, the woman just shook her head and said, "Okay, good luck."

I was so glad to have Nicole, my parents, and Trevor's parents in town to help me with the kids.  I was able to take a nap (if you count four hours as a nap) on Friday and another nap on Saturday.  Lovely!  Trevor stayed home with me on Friday just to make sure everything was okay.  Either that or he wanted to nap, too, so he could stay up for the UK basketball game Friday night.  Other than fatigue, I have been feeling pretty good and slathering my sweet scar with vitamin E oil as often as I can.

On Monday, I had my first appointment with my endocrinologist, Dr. Wendell Miers.  (He is really cool, by the way.)  He was able to get into the CBH computer and see my biopsy results from Thursday.  Drum roll, please...

There was NO cancer in the second lobe that was removed.  Not only was there that amazing news, but I also don't have to do the radioactive iodine treatment.  Dr. Miers started me on Synthroid to regulate the level of thyroid hormone in my body, and I will continue to do checkups with him every three months, then every six, and eventually once a year.

I knew in my heart that everything was going to be okay, but hearing the news for sure was a huge relief.  All I wanted to do was go home and sleep for twelve hours because I felt completely weightless for the first time in a long time.  I didn't get to do that, of course, but last night's sleep was one of the best I have had in a long, long, long time.

I truly appreciate all of the thoughts, prayers, and kind words that you have all sent my way.  I know that every bit of love has helped me and my family get through this rough, insane, and emotional time.  Thank you all!

Now that I am cancer-free, I can get to the business of packing up the house.  But that's a whole other blog... 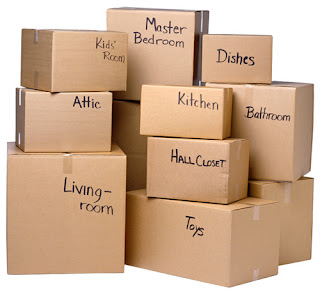 I was lucky enough to travel to Colorado recently to visit my BFF, Tiffany.  The travel itself was exhausting and crazy, as it always is, but it was worth every second.

I was supposed to fly from Lexington to Dallas then Dallas to Denver on Thursday night.  I arrived at the airport in Lexington with plenty of time to check in and get through security.  Turns out I was really super-early as there was terrible weather in Dallas, and I wasn't able to leave Thursday night at all.  I went home, slept for a few hours, and arrived back at the airport on Friday at 4:30 AM.  After hours and hours of traveling, I arrived in Denver around 9:00 AM.  Tiffany was there waiting to whisk me away to Fort Collins.

I spent Friday morning hanging out with Tiffany at her amazing house with the beautiful view of the mountains.  Tiffany's decorating is the perfect combination of eclectic, funky, vintage, and comfortable.  Simply put, it's stunning.  We spent Friday afternoon walking around Old Town, and then I got to see my other fantastic friend, Mike.  Tiffany, Mike, and I were all friends at Butler University, and we have remained friends ever since.  The three of us got lots of treats from Whole Foods and cracked up the rest of the night.  There was even a genuine spit-take from Mike.  Classic.


Saturday morning, Tiffany and I drove up to Estes Park.  We had huge plans to stay at the Stanley Hotel; the Stanley is what inspired Steven King to write _The Shining._   We were even going to stay in the room where he stayed: room 217.  We were on the road, about five minutes from the hotel, when Tif's phone rang.  Someone from the Stanley was calling to say that a pipe had burst and we couldn't use the room.  Now, if you know Tiffany, you know she rarely gets mad.  This was one of the times I could feel the rage coming off her in waves.  The woman from the Stanley ended up giving us another room for free and threw in breakfast as well.  We were disappointed, but really, we just wanted the bragging rights of staying in room 217.  We decided to make the best of a free room, and we went on our way.

After checking in, we went to our lovely room with this view: 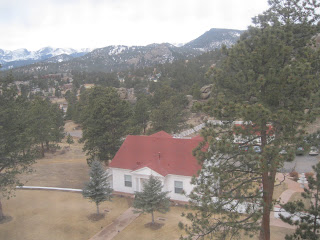 Incredible!  The day before, I was in Kentucky: now I got to look at the Rocky Mountains!  The only problem with the room was that it was 81 degrees, and the Stanley doesn't have air-conditioning.  We turned off the heat, opened the windows, and prayed it would cool off before bedtime.  We had a bite to eat (and maybe a drink) in the hotel restaurant before our ghost tour.  Spooooky!  Our tour guide, Teri, was very sweet and knowledgable about the history of the Stanley hotel.  It was really fascinating to hear how it all was started and what has happened on the grounds.  Tif and I, as usual, cracked each other up during the tour, but we were also respectful of Teri and the rest of the group.  I did ask Teri if she knew about the "burst pipe" in room 217, and she didn't know anything about it.  There was some sort of paranormal conference that weekend with famous paranormal experts.  Tif and I think that someone else offered to pay out the nose for room 217, hence the burst pipe story.

After the ghost tour, we hung out in the room for a while and watched _The Shining_ which plays on a continuous loop on the hotel's TV system.  We had another quick bite in the restaurant, then headed out for ghost stories by the campfire.  We assumed that this would take place outside because that's where campfires are, right?   We even stopped by the gift shop and bought matching furry hats because it was chilly up in the mountains at night.  The sign even said that blankets would be provided, and we were ready for some marshmallows and specters.  We bundled up and wandered the grounds looking for the fire.  We finally found it...in a fireplace.  The ghost stories were INSIDE.  We laughed and took a seat, but after about fifteen minutes, we had to flee.  It was about 85 degrees in that room, and we just couldn't take it anymore.  Then we thought we would treat ourselves to dessert from room service, but every time we called the room service number, we got the restaurant's voicemail.  Sigh.  In addition, the room had only cooled down to a balmy 74 degrees or so.  We reluctantly closed the curtains for the night so we wouldn't wake up with the sun, turned off the tv, and went to bed.  (This is an important detail.)


The next morning, we woke up a little late due to the time change.  Darn you, Daylight Savings!  We went to the restaurant and ordered about five things on the menu because, you know, it was free!  During breakfast, I thought to ask Tiffany if she had closed the doors to the TV armoire sometime in the night.  She hadn't. As I hadn't either, we wondered how the doors closed.  After breakfast, we went back to our room and experimented with the armoire doors.  It would have taken a fair bit of force to get those doors shut; we knew it wasn't the wind because we had closed the curtains in the night and no breeze had gotten through.  Did a friendly visitor shut the doors for us?  Maybe.  There have been numerous reports of strange happenings in room 413, so perhaps we didn't need room 217 after all.


We left Estes Park Sunday morning and did a bit of shopping in Boulder.  We also met Mike again for dinner at the Happy Sumo, and the sushi was incredible.  We picked up Tiffany's daughter in Thornton where she had spent an exciting weekend with her grandparents, and we were off again to Fort Collins.  We stayed up as late as we could Sunday night to squeeze in every last minute we could together.  Sadly, I realized that I'm not twenty anymore, and I didn't make it too late before I had to go to bed.  I blame the altitude for my exhaustion because it certainly can't be that I'm getting older.

My trip was over way too soon.  Tiffany and Frankie took me to the airport Monday morning.  It took no time to get through security, and I meandered through the airport for a while, sniffing back tears because I already missed my friends.  My flight boarded, and then we were stuck on the tarmac for a while because there was bad weather in Chicago.  We finally arrived in the Windy City, and I had an almost three hour layover.  After three gate changes, I finally got on a plane to Lexington and arrived home around 10:00 PM.

The visit was way too short, but it was fantastic.  It was just what I needed before I start the insanity of the next few months.  There's nothing like good friends to make a girl feel better about anything that may be worrying her.  Thanks, Tiffany and Mike, for showing me such an amazing time.  Love you guys!  And thanks to Trevor for taking such good care of the kids while I was gone.  You're a good man, T.