I have been a little MIA in the blogosphere lately.  I have great ideas for blog posts, and when I sit down at night after the kids go to bed...I'm too tired to write.  The last few weeks, I have been getting back to normal (or as normal as I get) while my new thyroid meds start to kick in.  However, I don't really have the luxury of time to sit around while the meds do their magic due to The Move.

The Move is happening in eleven weeks and three days.  That may seem like plenty of time to get everything done, but I assure you, it is not.  I have to declutter and pack up a 4,400 square foot house while trying to manage taking care of the rest of my usual chores.  In addition to kid stuff, mowing, laundry, more kid stuff, and then some kid stuff, I'm keeping the house in "showing" condition and packing as much as humanly possible every day.  So far, things are going pretty well.  I have gotten rid of a lot of stuff - a LOT - by donating it to a local church.  As an awesome bonus, Fausto, who has done  house painting work for us in the past, comes and picks everything up from us.  Score!  The trick is to get rid of things while the kids are at school or otherwise occupied.  If they're around, every single thing I try to put in the donation box becomes the VERY BEST TOY EVER IN THE WHOLE WIDE WORLD.  Quite frankly, I sort of have to pull the same shenanigans with Trevor.  I found a box of files that had some of his old phone records and random bills from when he was in law school.  Uh huh.  I'm really glad he moved those from house to house without ever opening the box.  So, bye-bye bills.  Bye-bye college textbooks.  Bye-bye gross, sweat-stained baseball hats.  (And you just know he's going to read this now and immediately begin to squirrel things away.  Here's a tip for you, T: you had better start bolting things down because Mama's going scorched earth and there's nowhere to hide.) It's not just that it costs about a billion dollars per pound for a long-distance move.  I mean, that's a huge factor, but it's more that I am ready to live a simpler life.  I want less...stuff.  Less stuff to clean, to care for, to worry about, to move, and to contain.  I want to spend more time with my family and the people I love.  I want to spend more time doing what I love to do and enjoying each day as it comes.  I'm always going to have the memories associated with the things even if I don't have the things, you know?  If the whole cancer brouhaha taught me anything, it's that being happy doesn't come from having things; it comes from appreciating all of the intangibles in life.  Peace comes from forgiving, starting over, and moving on; it doesn't come from holding on to what you don't need.  Don't get me wrong: I still have stuff but I think a lot less of it will help me focus on what's really valuable in my life. 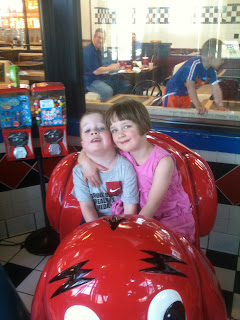 The facts of life according to Lottie

Here is a transcript of my bedtime conversation with Lottie tonight:

Lottie: "Mommy, can I snuggle in your bed with you?"
Me: "Just for a minute, baby, but it's time for bed."
Lottie: "But I don't like being alone in my room.  Can I sleep with you and Daddy."
Me: "No."
Lottie: "But I'm lonely in my room."
Me: "When you're a grown-up and married, then you won't sleep alone anymore."
Lottie: "When I'm married, I'm going to have my bed right next to your bed so I can crawl across and hug you anytime I want to in the night."
Me: "Hmm, I don't know if the person you marry will like that very much."
Lottie: "Mommy!  Dallas won't mind at all."